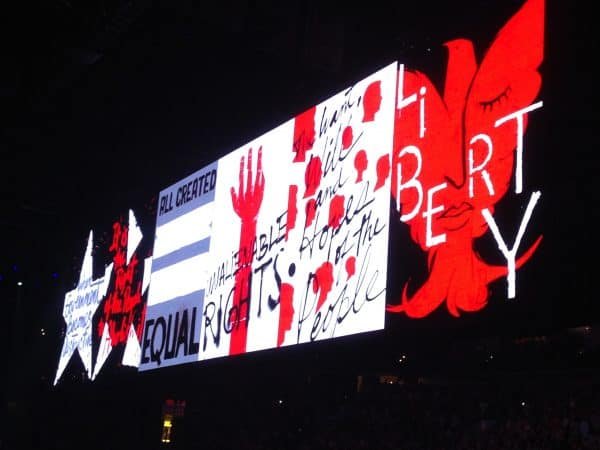 U2 was in Philadelphia, Pennsylvania at the Wells Fargo Center, for a two-night show on Wednesday, June 13 and Thursday, June 14, 2018. I attended the first night’s soldout show.

As usual, the boys from Dublin, Ireland performed in a spectacular fashion (minus any songs from the Joshua Tree) that included a large screen that cut the arena in half. While the massive screen produced eye-popping pictures and animated videos, the band and their message of equality and social justice was the focal point.

In an effort to make the show more intimate for the audience, the band migrated from one end of the long stage to the other, spending a great deal of time at each spot.

They also made great use of the video screen that moved up and down during the transitional moments of the show, and it doubled as a means of entering the more intimate, satellite stages.

I’ve seen U2 three times now. I’ve always felt their music had a moral and, at times, a Biblical message. There was an element of accountability added to this show.

Is it because their songs and projected images spoke truth to the political climate plaguing our country? Is it because they understand what it’s like to live in a nation whose citizens are divided? Whatever it was, something in their performance struck at an exposed nerve that surfaced in November 2016.

Aptly utilizing their music as a powerful soundtrack, U2 tells us a story that focuses on the innocence and experience of life. While animated images of neighborhoods and family photos flash across the screen, Bono personalizes the narrative for the audience by speaking of the loss of his mother when he was young, and the political violence that surrounded him growing up in Ireland.

This witness to political upheaval lends credence to their empathy and understanding for America’s current struggle. Like so many others, U2 voiced their thanks to America for accepting the immigrants that came here, especially those from Ireland. They also expressed concern for American democracy that they didn’t just articulate through words.

They used their giant screen to show us real-life images of United States citizens in times of political turmoil. Some of these videos were hopeful, like Dr. Martin Luther King during the Civil Rights Movement; others were profoundly shameful, like neo-Nazis in Charlottesville, VA, flaunting Confederate flags and swastikas.

Another big message of their tour is inequality toward women and poverty. In conjunction with Bono’s ONE organization, the band is helping to spread the word about gender inequality in the world’s poorest countries.

In some parts of the globe, millions of girls are unable to attend school because of their gender, and a billion women lack access to bank accounts.

Under a black screen with glaring white letters that read, #womenoftheworldtakeover, U2 invited everyone at the concert and around the world to add their voices to the cause of, equality for all, by singing the chorus, Women of the World Takeover, and posting it online.

As always, by the end of the concert, the band’s unique chemistry mingled with audience’s enthusiasm left my spirits soaring, and I felt hopeful for humanity. I want to hold onto that sensation and make a wish that someday everyone, everywhere will have the same optimistic feeling.

Thanks, U2 for a great show and for all you do to help fight injustice. #Pride #Inthenameoflove #Loveisallwehaveleft